"It was absolutely overwhelming. We were shocked, mesmerised and so appreciative" – that's what homeless charity volunteer David Quinn said after colleagues from our Kilmarnock store surprised him with a £10,000 Asda Foundation grant.

Store manager George McFarlane and community champion Emma Wylie Springer regularly volunteer with East Ayrshire Churches Homeless action, which has been providing crisis care, advice and practical support for people in need in the area since 2004. They presented the cheque to David, who's pictured above with George, Emma and EACHa secretary Janice Grant at the charity's Christmas party.

David said: "This money means we can move forward with confidence, and sustain and develop what we're doing. These problems are not going away so we're here for the long-term. 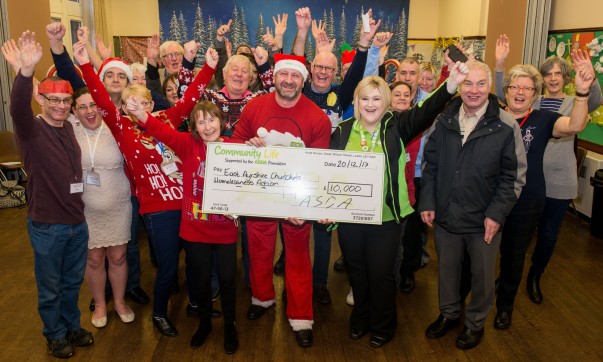 "We all love the job which is why we do it. People who come through our doors are in crisis. They can be suffering from poverty, addictions, they could be homeless, sofa surfing or at real risk of becoming homeless."

The charity provides a wide range of services at its drop-in centre, offering the opportunity to talk to people who can help – including a housing officer, doctor, nurse, citizens' advice and other agencies. They even offer haircuts.

David said: "We find people are open and honest about their problems when they have a chat with us over a cup of tea. We had one young gentleman come in who'd had a family breakdown and he was out of the house. We recognised this was a crisis situation so we encouraged him to engage with the local authorities, and through that intervention he's now in a hostel for young people receiving support instead of being on the street."

David said: "Emma mucks in and helps in the kitchens, but the biggest thing is the befriending aspect. She'll sit down and have a wee chat with the guys who come in, and she's really got an empathy with what they've gone through. The support of Asda, Emma and George really is fantastic." 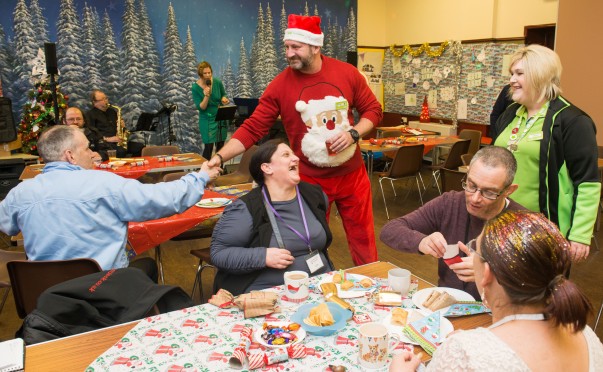 George said: "There wasn't a dry eye in the house when we confirmed they would be receiving £10,000! It's great to give a little back to a fantastic group like this – it's without a doubt one of the best parts of my job.

"I like to think that my job is challenging, but when you see these people trying to push water uphill, and succeeding, it's something else.

"The people who run this group are inspiring characters, and they take care of people because they see it as their civic duty. It's all done off their own backs, so we do all we can to support them. They see familiar faces like us come along to help and they know somebody cares."